Located in Tokyo’s Akasaka district, this establishment combines the essence of both kappo and ryotei style restaurants. It serves proper Kyoto cuisine without pretension or affectation. The food, the tableware, the furnishings, the teahouse-style façade . . . all represent the utmost in refinement, embodying the grace of Kyoto hospitality. 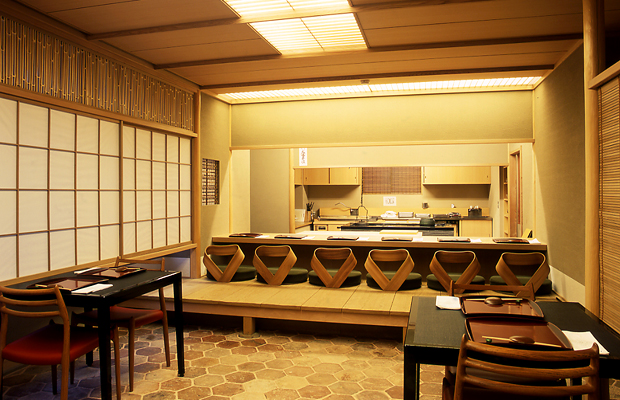 The icing on the cake, Kikunoi at Akasaka has been awarded two Michelin stars on “Michelin Guide Tokyo Yokohama Shonan 2013”. The big night, we were excited, intrigued…

When we arrived, the staff welcomed us warmly despite our lateness. We got lost on the way…  we made confusion between the stations … Akasaka and Asakusa are almost the same right? But it was not really near. But it didn’t matter, the traditional decor, the cleanliness of the place and friendly staff put us at ease. We sat in front of the counter, our favorite site in japanese restaurant. 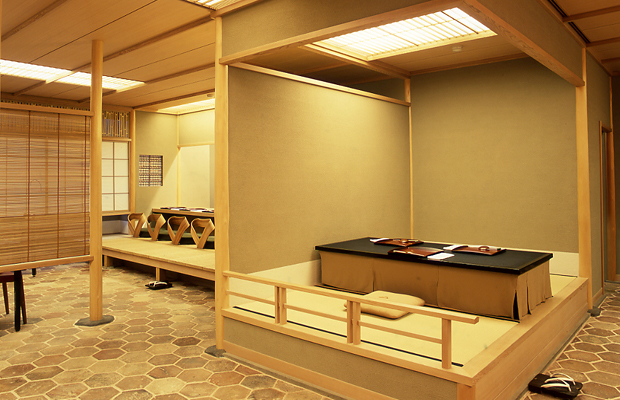 They gave us the English menu. Eleven dishes will be served. ELEVEN! So many … But these were small portions.
The first one was a small dish of poached octopus with yam and wasabi. There were small flowers sprinkled on top, this was adorable. At the first bite, I discovered a variety of flavors: slightly spicy wasabi, small flowers, very fragrant, octopus with its special texture … This was good, this was promising! 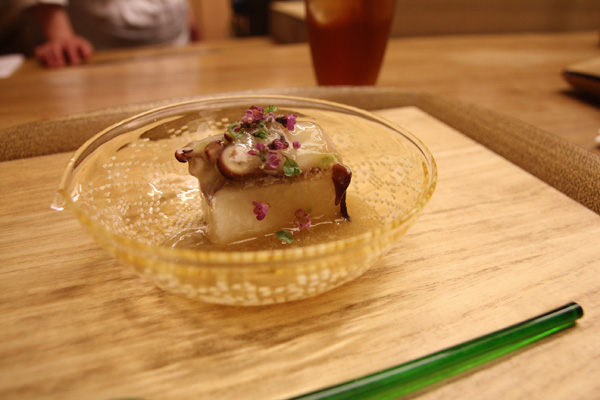 Poached octopus and mountain yam, shiso flowers, wasabi
Then came an assortment of appetizers. There was a sushi bream wrapped in a bamboo leaf, pickled ginger, eel terrine of fish eggs, liver, eel in the small cut. Delicious liver eel! It was not far from the foie gras but … eel version. 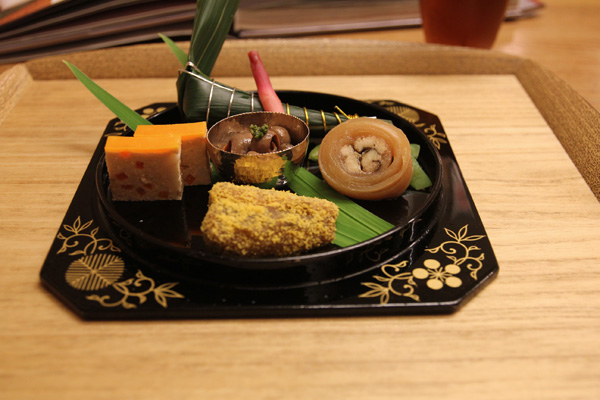 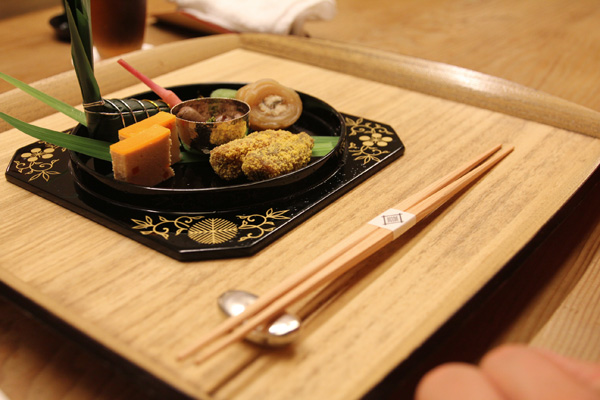 I kept sushi wrapped in bamboo leaf to the end. It was made with glutinous rice, it was very good! 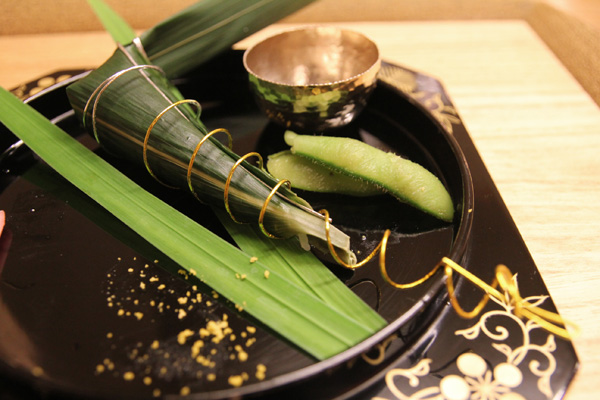 After this dish, they brought us a small bowl decorated with dragons. This was a bowl of white fish sashimi. 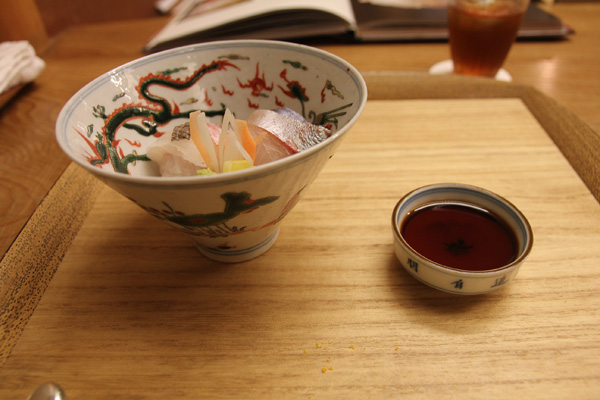 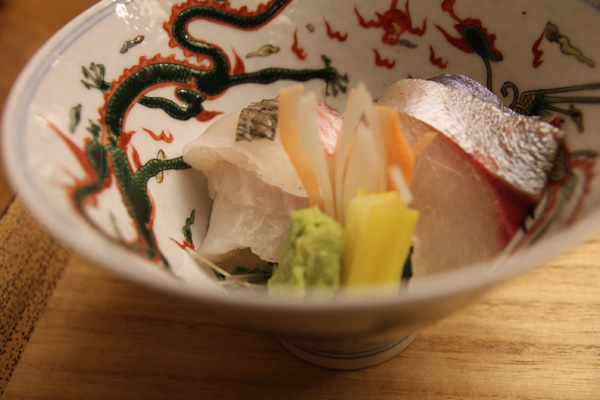 After white, here was the goldfish with the bluefin tuna sashimi marinated in vinegar. I found the taste of vinegar a little too strong. I definitly prefer the raw fish! 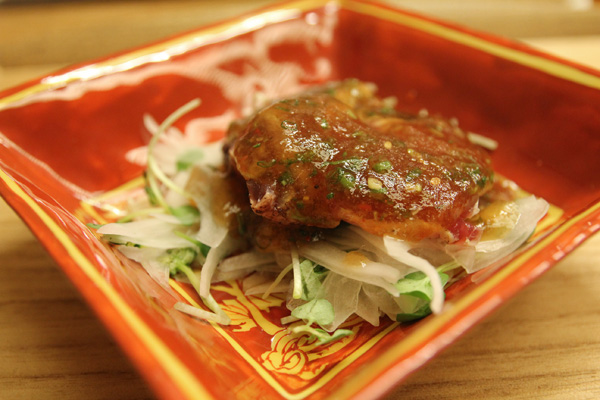 Sashimi over, we got a bowl each. We removed the lid … 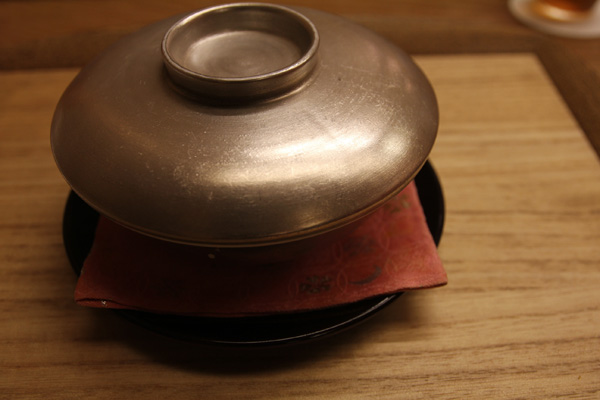 and we found a very curious little soup … These were green tea noodles wrapped in fish. We tasted … 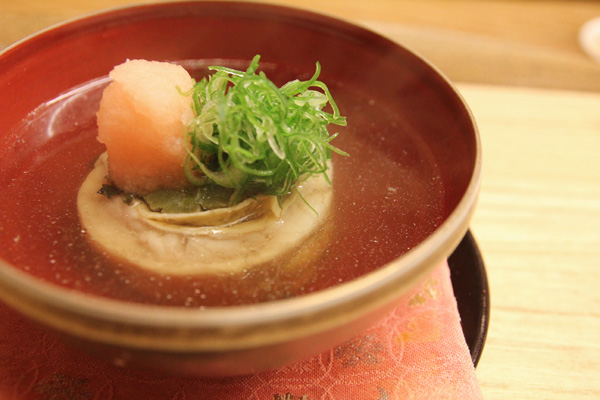 and this was exceptionnal … It was delicious, refined, soft and full of flavour. The noodles were melting and the fish was excellent. One of our favorite dishes. 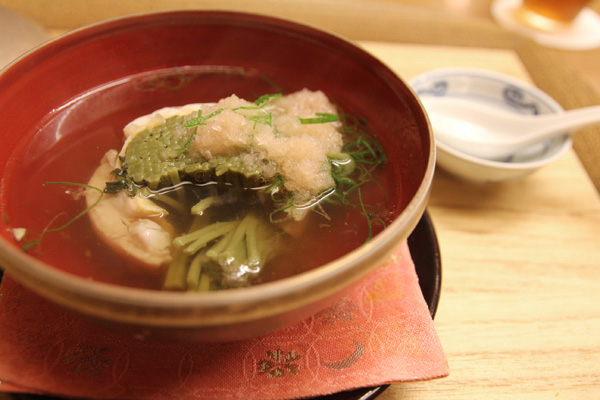 The next dish was original: A small green sauce and two small grilled fish. The chef told us that we must eat the whole fish. With the head, tail and all? Ok, I tried. It was salty, crisp, it was good! 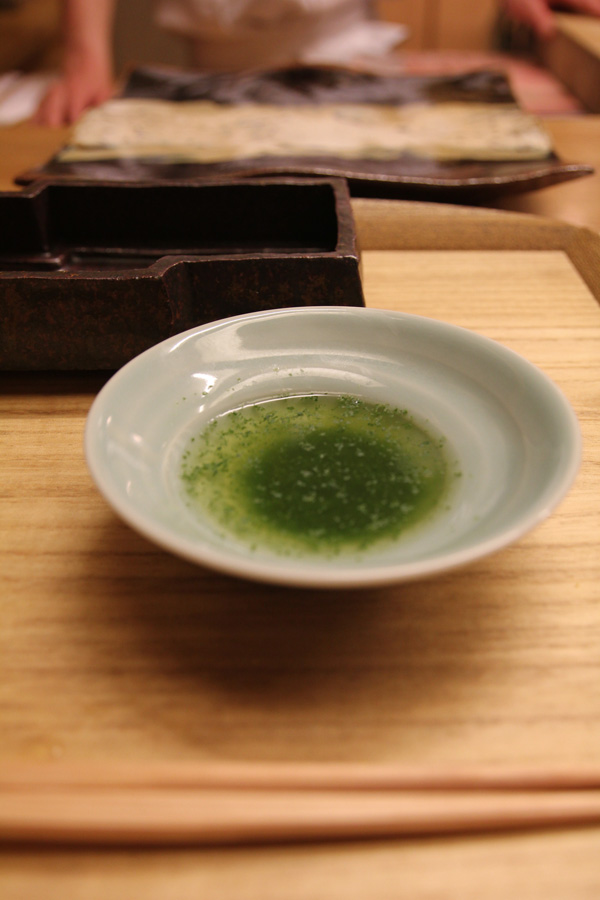 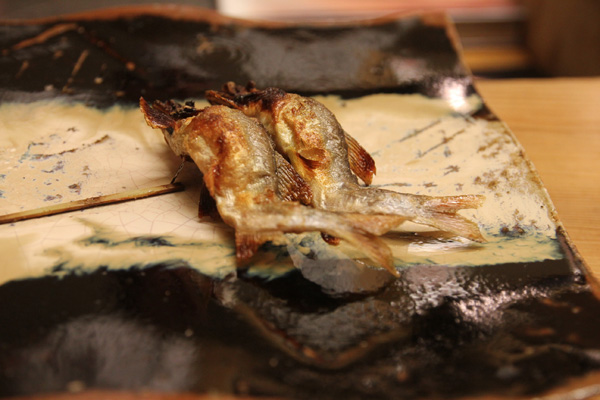 This little green thing was my number one of the dinner. First, because it was terribly cute and then because it was simply delicious. They say eggplant (aubergine) but it was not an eggplant taste. It was fresh and flavorful. It’s hard to describe because I’ve never tasted anything like this before. 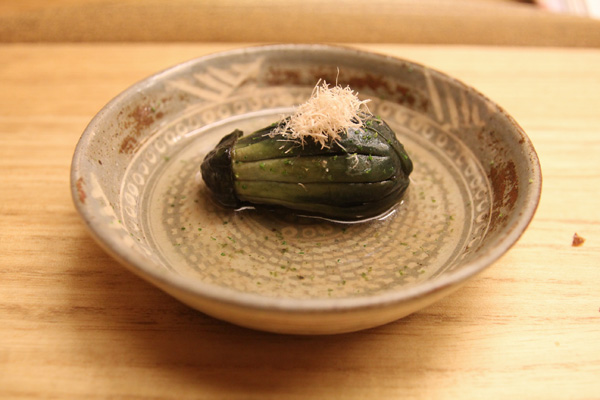 Other number one dinner … Yes I know, but when all is good how to choose? So this adorable little container … I wanted to keep it like that so I found it pretty … We opened it … 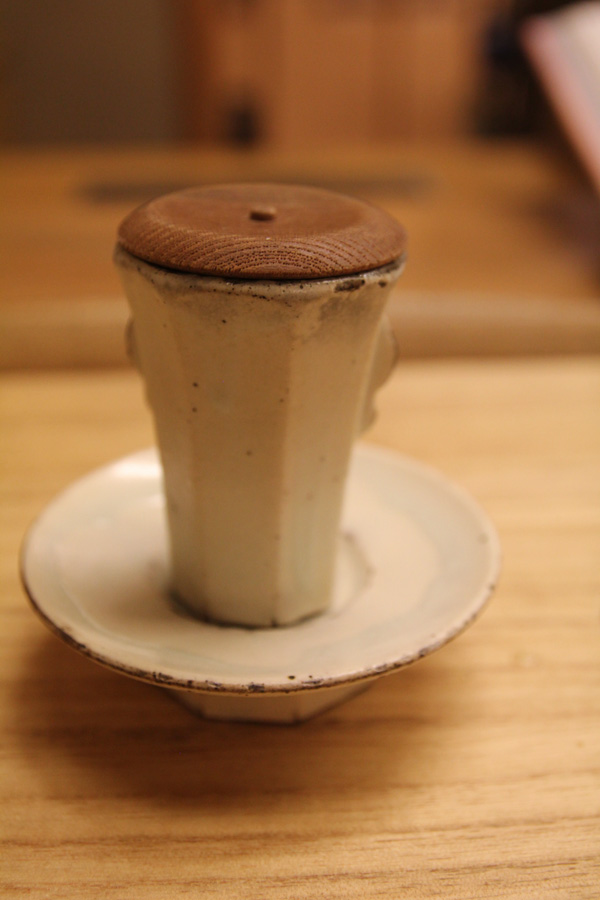 and there we found the same small flowers that I liked at the first dish … This little thing is called Jyunsai. I do not know what it is. The chef shows us that we have to drink it. 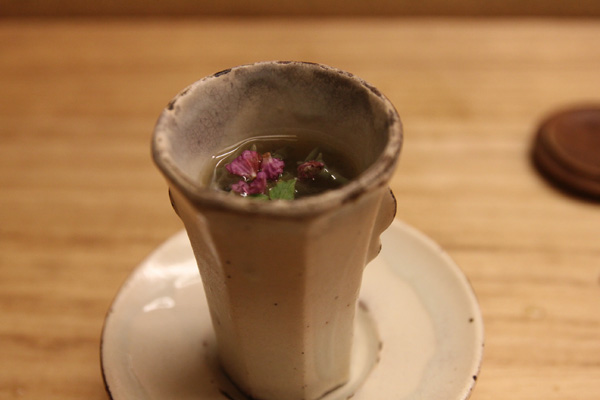 Jyunsai (water shield), myouga (japanese ginger)
And then again, explosion of flavors  unknown … There were like little seeds a little gelatinous. It was very strange but after tasting the verdict is unanimous: it was delicious and very fresh.

The eighth dish comes in last place in our rankings. This is very good but not exceptional. Small pieces of fish and beans. 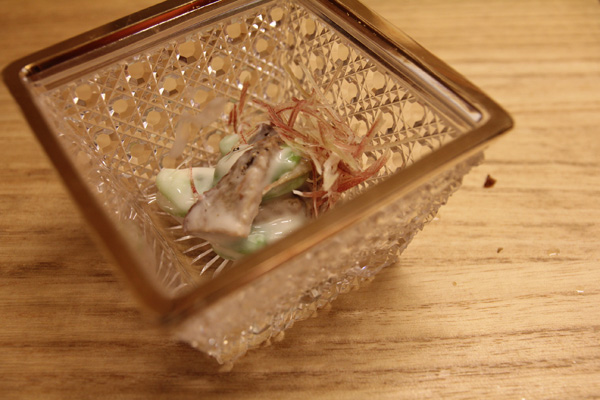 The rest did not disappoint us. The plate was fabulous. The colors were beautiful, lobster and egg mixture was perfect and the flowers very fragrant green peppers … we feasted, delicious! We began to be widely satisfied, but it was not finished yet. 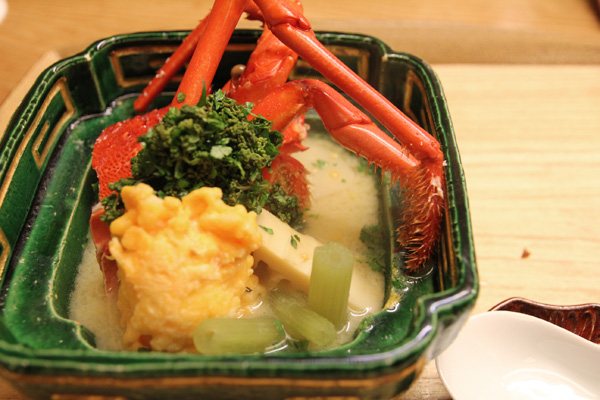 We ended with a dish called tai meshi. It was rice cooked with whole fish. It was then mixed and distributed in small bowls. There are three different accompaniments in small plate. The small potato soup complemented and finished this declicious dinner. 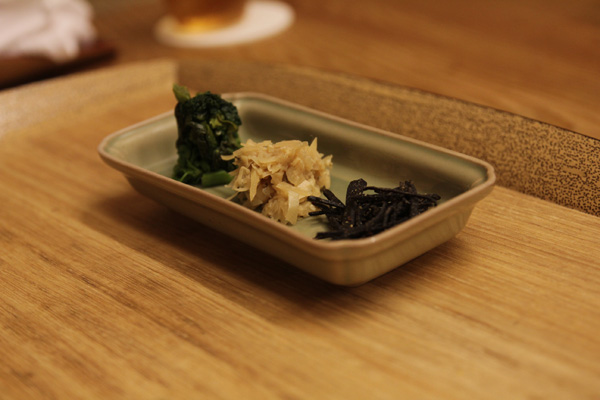 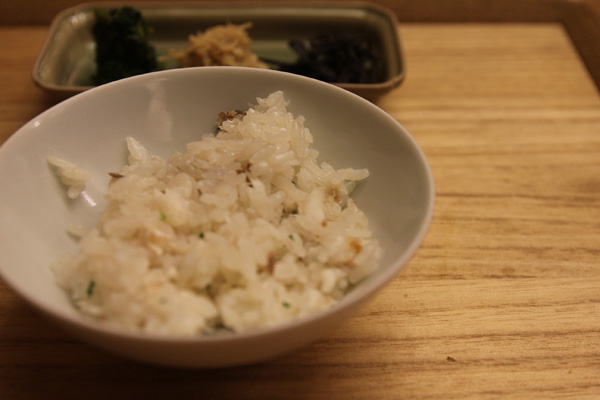 It is not quite finished … we are offered dessert to end the evening. It was late,  we were the last. I was not hungry anymore but I never say no to dessert. : D
I took strawberries with ice and TH picked the champagne sorbet with melon. 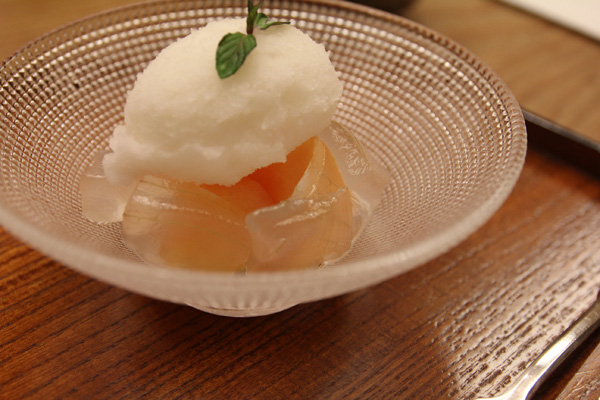 We left the restaurant happy. The staff was very caring during dinner, it was a pleasure for the eyes and the palate! Now this is no more than a beautiful memory that we are no ready to forget.
It will be hard to do as good as that for my next birthday. 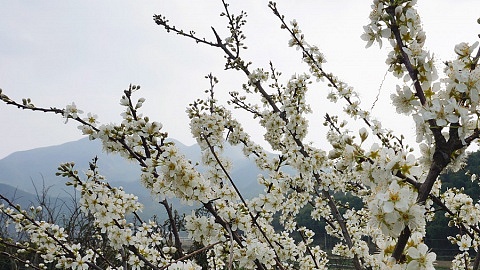 A few weeks ago, I was invited by the travel agency Thomas Cook to take part in a trip to Moganshan with a few other bloggers. As soon as it comes to... 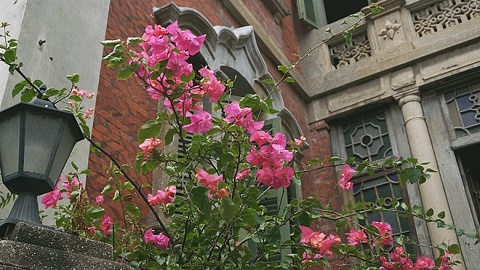 Recently we realised that we hardly travel in China anymore… and that is a shame as this country has so many wonderful places to discover. That’s why we... 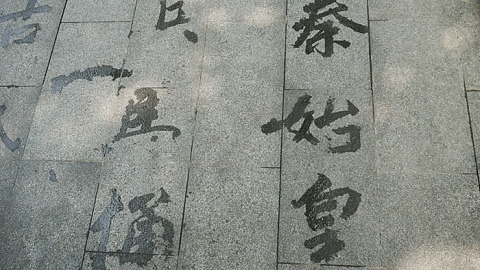 I have lived in Shanghai for 5 years, but I would never finish discovering new places. That was the case during a bike tour organized by Culture Shock. It...

Yesterday, I led an illustration workshop for chil

Super excited to share the print test of my new ba

Heartless monsters. That's what we were before bei

Oh please, tell me I'm not the only one struggling

So excited to introduce you the 3rd book of LaPtit

I know, I know... Naughty mom who steals her kid's